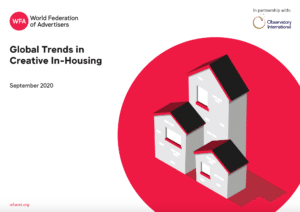 Large global companies are rapidly expanding the scale of their in-house creative agencies, particularly for digital content, according to new research undertaken by the WFA and The Observatory International.

Three out of four in-house units have been set up in the last five years and in-house teams are attracting more work, with 82% saying

workloads are increasing in the last year. Anecdotal reports also suggest that coronavirus has not led to cut-backs in these agencies, but in some cases quite the reverse.

Global Trends in Creative In-Housing is based on responses from 53 advertisers with an approximate annual global spend of US$ 83 billion.

The report found that out of the multinational companies that have an in-house agency, almost all, 94%, have in-house creative capabilities for digital content. This compares with around half who have in-house media planning and buying capabilities.

The majority of creative resources are based around a centralised studio at HQ with 50% adopting this structure. Twenty-three percent reported a decentralised structure and 15% had regional teams.

Almost all respondents (95%) continue to work with external agencies however, and among this group approximately 37% of creative output now comes from the in-house team.

Despite the widespread assumption that advertisers could struggle to attract high quality talent, respondents reported an average staff turnover of just 9%. Most of these teams (74%) have been set up in the last five years, so it may be that their relative youth contributes to this solid performance.

“What this survey highlights is the need for clearly defined roles and responsibilities as well as a clarity over scope of work for each agency, in-house and external. Having an imbalance in working processes creates problems and challenges that could mean that neither resource is used to maximum capability,” said Stephan Loerke, CEO at the WFA.

Other key findings include:

A number of respondents did report managing the relationship between their external and in-house creative teams was a challenge. Some looked to external agencies for big, strategic ideas development, with regular production work done in-house but others had the reverse approach.

Almost 40% said that they allowed both in-house and external agencies to pitch against each other for projects to drive the best possible responses. One problem was that 43% said they briefed in-house agencies differently to the external ones, and 52% admitted that their in-house agencies were assessed by different KPIs.

“In-housing creative resource is proving to be a success for brands who have undertaken the necessary operational reviews and have built a resource that is designed to complement their external agency model and meet objectives specific to their business.  That isn’t to say that it is suitable for every company, and there are a wide range of factors to be considered before embarking in an in-housing journey.  Ultimately, it is not just as simple as hiring some people directly, but instead is a major operational change that impacts company culture, ways of working, technology, agency relationships and cost models,” said Rob Foster, Senior Consultant at The Observatory International.