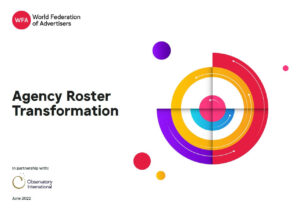 Agency rosters are in an era of constant change, with the majority of multinational advertisers already changing or planning to reform current structures for working with external partners, according to new research from the World Federation of Advertisers and The Observatory International.

In the wake of a menu of challenges such as the global pandemic and exponential rise of digital, combined with added pressure in areas such as sustainability and diversity and inclusion, just 75% of major multinationals said that they were ‘somewhat satisfied’ or less with their current agency roster structure.

Additionally, nearly seven in 10 (69%) had recently made, or planned to make, changes to their roster to reflect the new world order and their desire for a different structure. Only 25% of respondents were ‘very’ or ‘extremely’ satisfied with their current arrangements.

Previous WFA research in this area carried out in 2018, found that major multinationals recognised that their roster set-up was not meeting their needs sufficiently, scoring them an average of only 5.7/10. New challenges in the last four years such as rapidly changing consumer behaviours and the digital revolution have reinforced the need for new arrangements.

The 2018 survey also found that 60% of clients were looking to reduce the number of agencies on their roster. Managing multiple agencies effectively requires time and resource on the part of the marketing function.

The new data reveals that in 2022 respondents most commonly work with 1-25 agencies across all marketing disciplines both globally (67%) and regionally (71%), aided by greater centralisation in partner appointments.

“There are many reasons why rosters need to be updated. Sometimes existing structures don’t work due to internal issues at the advertiser end. The accelerating rate of change in consumer behaviour and digital usage makes it highly likely, however, that most rosters are heading for a period of constant evolution as brands seek new ways to be more effective with their marketing communications,” says Julia Kraft, Senior Manager, Global Marketing Services at the WFA.

The findings are based on responses from 32 advertiser companies across nine different sectors. All respondents were senior leaders responsible for agency management, with 81% holding a global role, with the remainder having regional responsibilities Total annual respondent spend was more than $55bn.

One big winner from the current desire for change is likely to be in-house agencies. Eighty percent of respondents now have an in-house agency set-up of some shape or form, up from 57% in 2020, and a further 13% say that they are considering establishing one. This change will not only alter agency scopes of work but also will require additional focus on working processes to ensure effective collaboration between external agencies and in-house teams.

Other key findings from the report include:

“The one consistent element in all this is that there’s no silver bullet for all. Because businesses and the way they engage with their customers vary significantly from company to company, then so must the model – not only from the agency perspective but also in terms of how the client is organised themselves,” said Stuart Pocock, Founder and Managing Partner at The Observatory International.